It is nearly a year since we have had to deal with the Covid-19 pandemic and as a wildlife photographer it has been an extremely difficult time and shows how our business model is open to such a pandemic to hit us. I have been working with a few subjects in the UK when we were not in a lockdown which has been great, but I have really missed travelling to some of the places that I usually go to on an annual basis. One destination that I have missed going to and I should be there now as I am typing this is Yellowstone National Park in the US. I love working in the winter in the northern hemisphere because of the simple images that you can create in the snow and Yellowstone is a cracking place for photography with dramatic landscapes and iconic wildlife. Bison, Elk, Fox and Wolves just a few of the species that can be found in the park and in good numbers too. The park gives you the feel of being in a true wilderness with an awe-inspiring landscape. 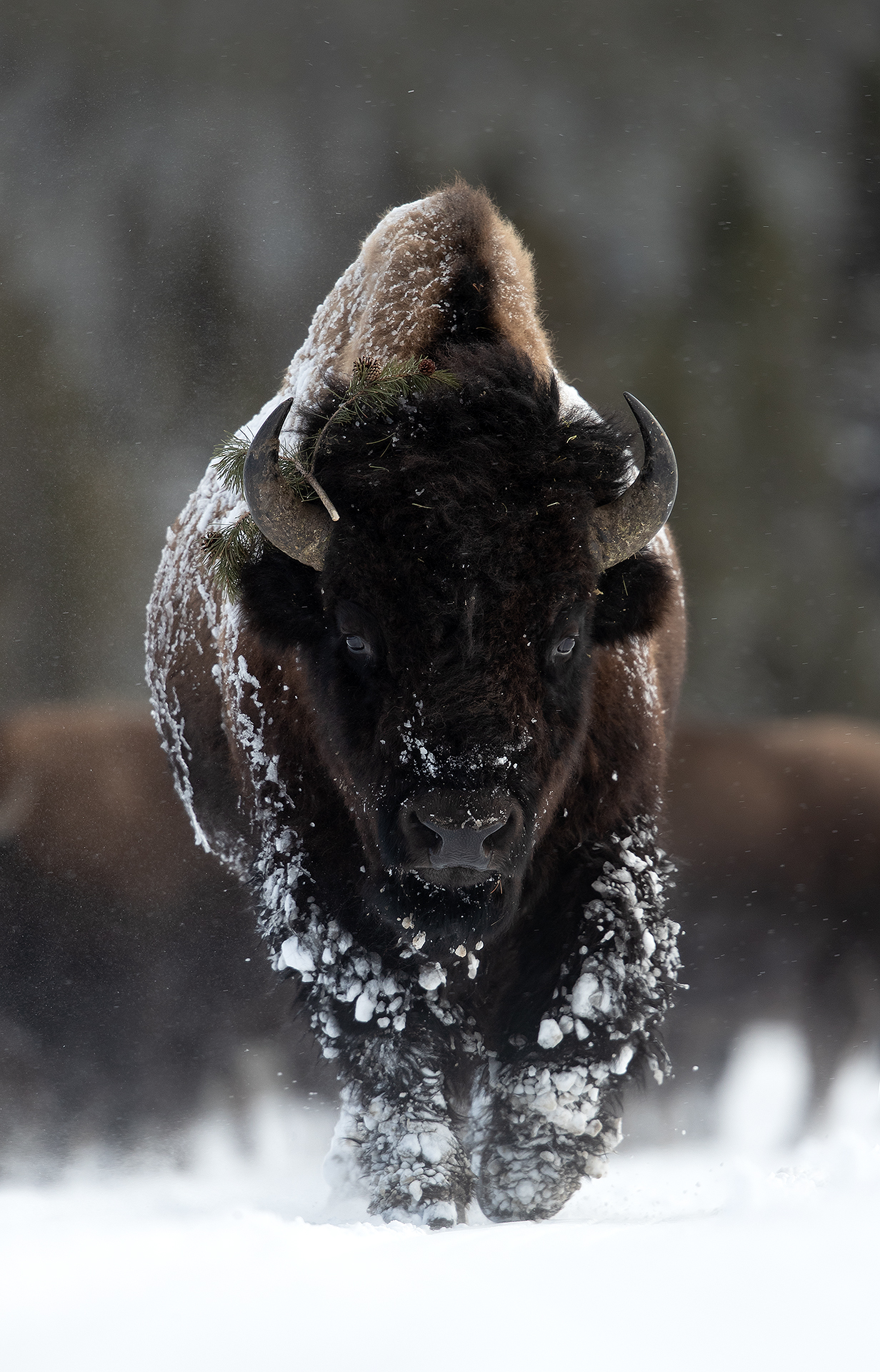 I have had the good fortune now to visit this wonderful place for the past ten years now and every trip has been different for me with good opportunities for various species over the years and I feel now I am starting to build up a good portfolio of the fauna that can be found in this wonderful National Park. This selection of images is from the last couple of trips that I have done to this fantastic location. One of the reasons why I wanted to go to Yellowstone in the first place was to see and photograph the American Bison. Yellowstone is the number one place to see this species and the population is healthy with an expanding population. The Bison was once one of the most numerous animals on earth. Before the European settlers arrived in America there was estimates of between 45-60 million Bison that roamed the great plains of the western states. That must have been one of the greatest spectacles that you could have seen in the natural world and how sad that this beautiful animal had to suffer such a fate at the hands of humans.

The Native Indian tribes hunted the Bison, and nothing was wasted with everything from the animal used from the meat for food, the skin for clothing and tepees, to the bones for making tools and weapons. The plains Indians stood in the way of the colonization of the states and rightly put up a valiant resistance to the white settlers. After many years of trying to defeat the Indians the decision was made to target the huge herds of Bison and so the slaughter began. Within a few years the Bison herds were gone and the so the defeat of the Indians was just a formality. This story must be one of the saddest stories in the history of our domination of the natural world and something we have lost forever.

The Bison was facing extinction, but a few pioneering people single handily saved it and Yellowstone National Park was one of those places where the Bison clung on and after full protection was given to them numbers slowly started to increase. Today there is now over 5,000 animals that roam the park and so thankfully this iconic species was saved. It will never reach the numbers of the past, but it still roams Yellowstone freely. 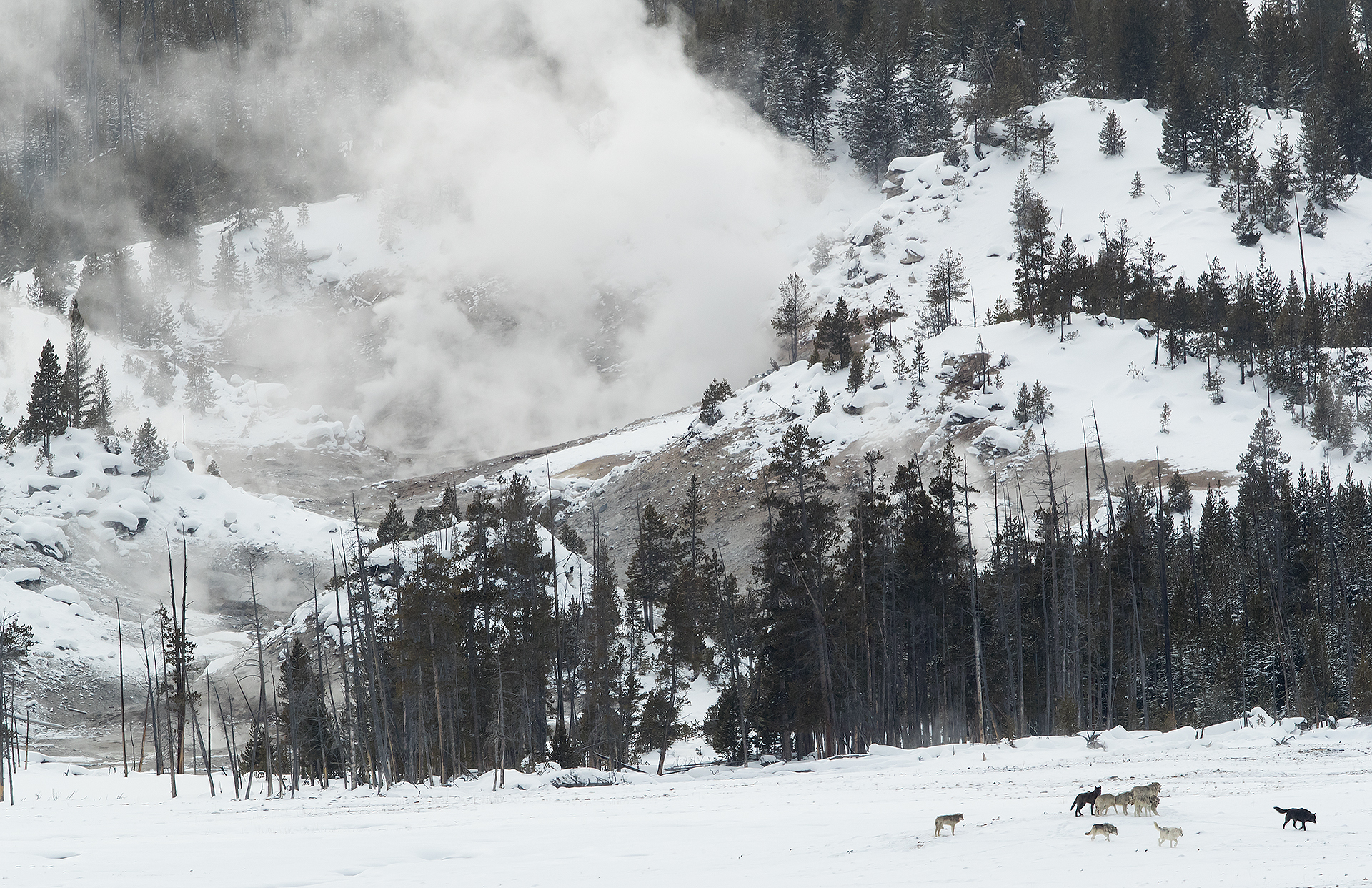 The Wolf is another species which Yellowstone is famous for and the park is probably your best chance of seeing this beautiful predator. Like the Bison the Wolf has been relentlessly persecuted over the past 200 years and had disappeared from Yellowstone completely. The Park had changed dramatically as a result of the top predator missing from the chain. Elk numbers had increased in certain areas and over grazing by the large numbers of Elk was causing problems for other species. One of the problems was the destruction of the Willow flats along the river valleys and species like Moose and Beaver became rare or in the beaver’s case, extinct as well. In the nineties a decision was made to re-introduce the wolf back to Yellowstone. The introduction was a huge success and within a few years Elk numbers were starting to be controlled and Moose and Beaver had started to return.

The project has proved how important it is to have a natural balance in the natural world. The Wolves have not made an impact on the numbers of Elk as they are still roughly the same as the pre-introduction period. What the Wolves have done is not allow the Elk to settle in areas over longer periods of time and so the Elk are constantly being moved on by the hunting wolves. This then has let areas recover from over grazing. Not only is it making the Elk population healthier, but the other species are moving back too. Even Grizzlies are benefiting from the wolf population as there are now more carcasses for the Bears to find and feed on which is a huge boost especially in the early spring just after they have emerged from hibernation.

One species that did not do too well with the re-introduction of the Wolf was Coyote. When Wolves were absent from Yellowstone for all those years the Coyote was top dog but within a few years the numbers dropped but, back to a more normal level. The Coyote is still the most likely member of the dog family that you come across in Yellowstone though. They make great subjects, and it is a slow day if you do not see one. One of the best places to find Coyote’s in Yellowstone is along the frozen rivers as they search for fish trapped in pockets of ice or trying to steal fish from Otters. For the shot above I was driving along, and I saw a Coyote in the distance that had just walked along the edge of this river as you could see its fresh tracks in the snow and the location looked wonderful. I thought I had missed the opportunity but when you get one Coyote though you usually get two, so I waited and then this male was close behind and I got my shot. 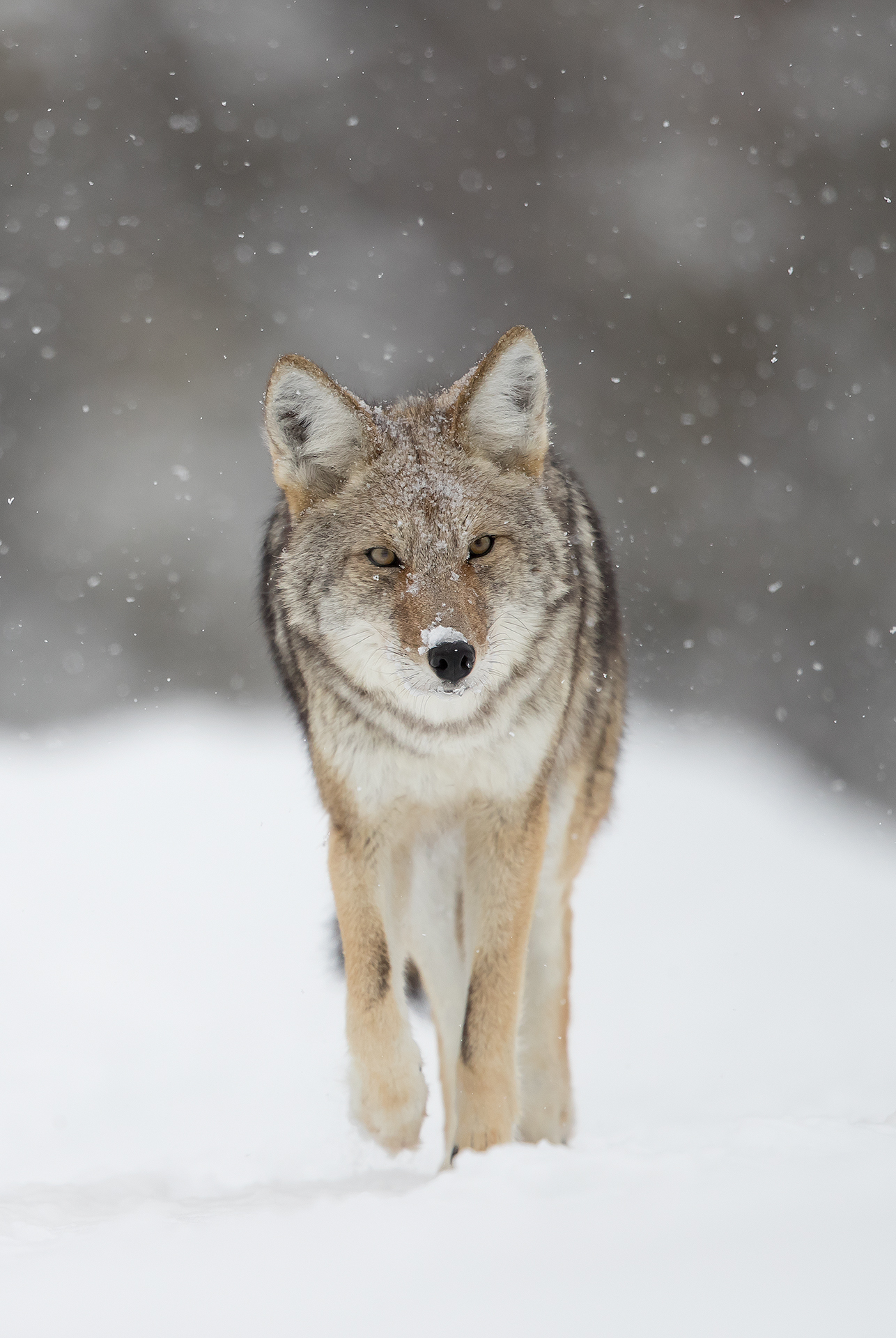 Along these frozen rivers you can come across Otters which are one of the most elusive animals of the Park. I have usually been unlucky with sightings of Otters over the years, either just missed them by a few minutes or they were a long way off for any decent images of them. That changed last year though as I had some amazing opportunities along the Yellowstone river as we kept coming across a mother and her two fully grown cubs. It was amazing to finally get some images of this stunning mammal.

The species list that you see in Yellowstone is not a huge one but if you are lucky you can come across some very elusive species. Bobcat numbers are also quite healthy, but it is extremely rare to come across them. With a bit of luck though you can find them hunting along the rivers that wind through the park. They sit patiently waiting for a fish to splash in the shallows or an unsuspecting wildfowl to swim close by. They blend in so well to their environment and can be extremely difficult to spot. 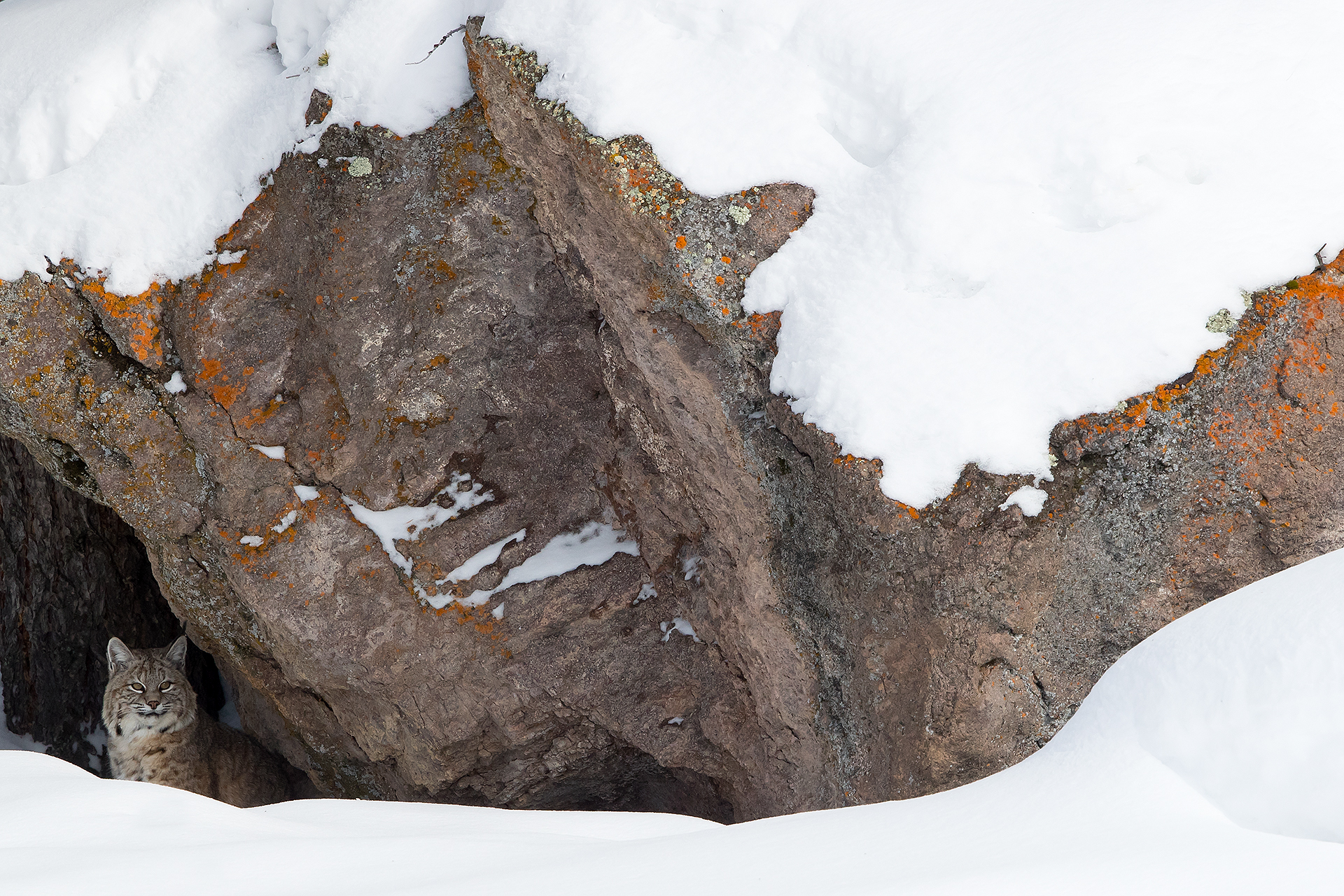 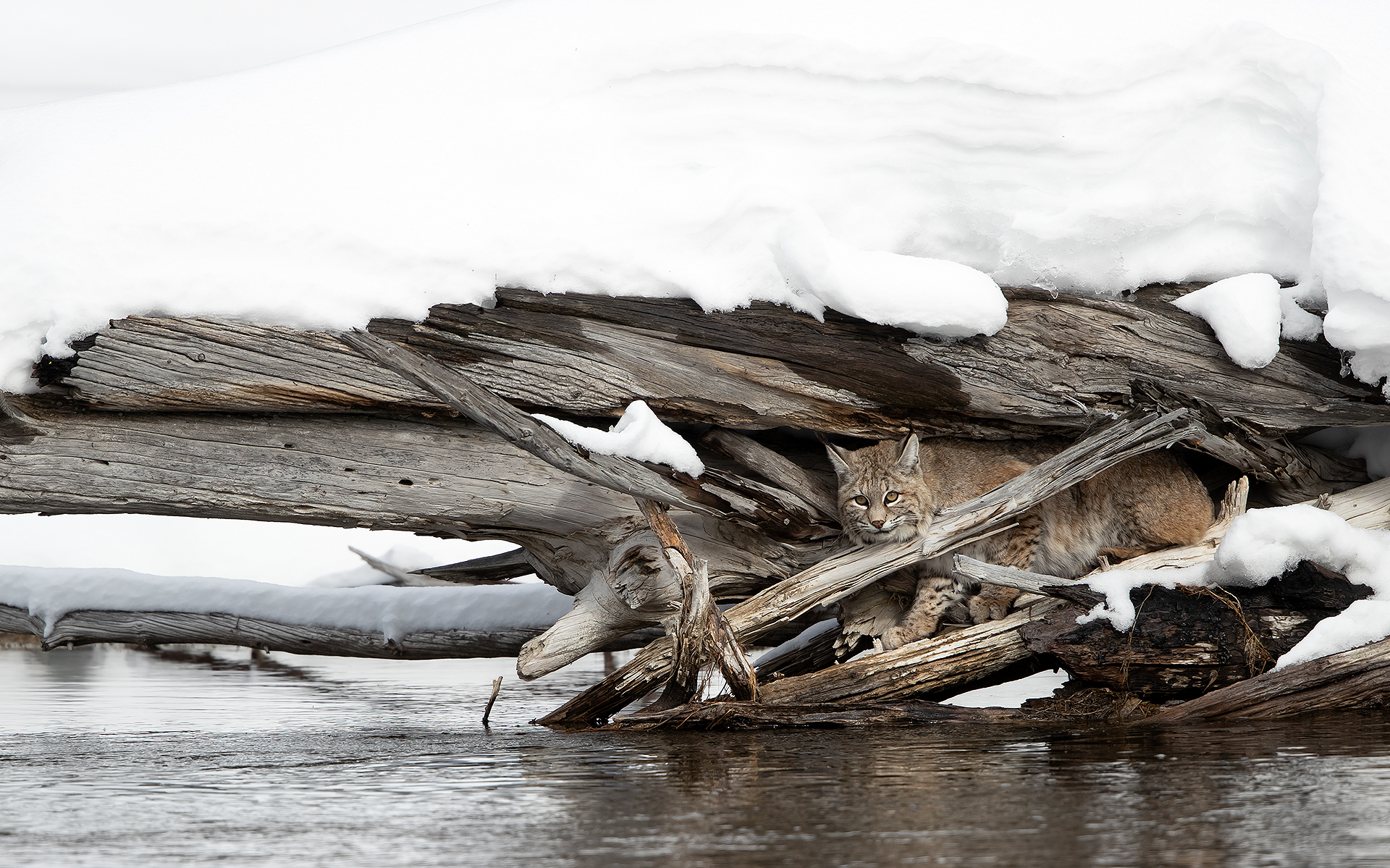 Another great species to see in the Park is the Red Fox and is without a doubt one of my favourite species to photograph. The Red Foxes in Yellowstone look beautiful during the winter months when they are supporting their thick winter coats. Red Foxes are very shy and elusive throughout the world but because there is no hunting in Yellowstone the Foxes are much tamer and can be very approachable.

Yellowstone is not blessed with an array of species, especially during the bleak winter months but when you do come across them, they make great subjects. Moose are becoming much easier to see especially in the Lamar Valley in the Northern parts of the Park which is also good for seeing the impressive Big Horn Sheep. 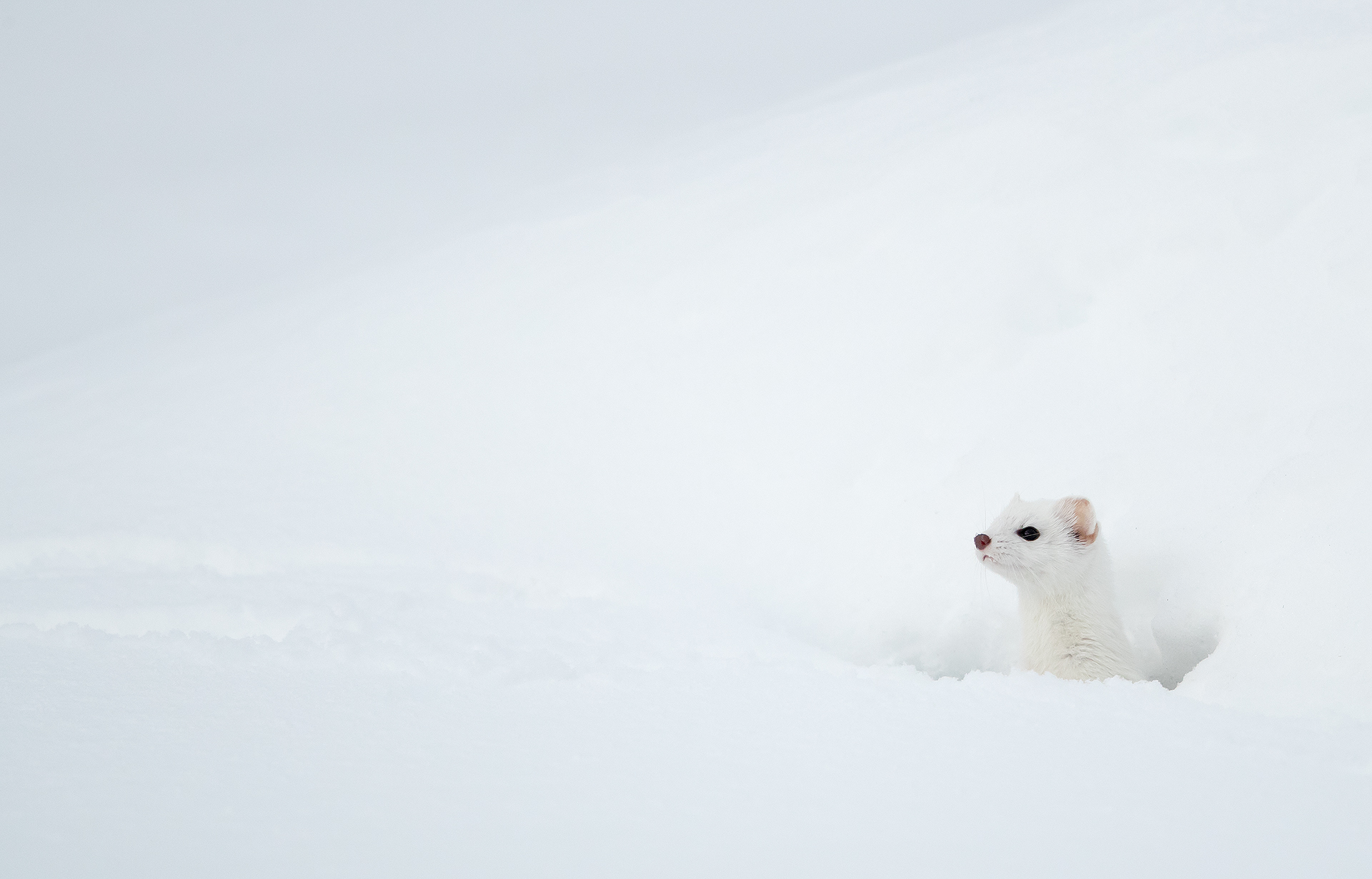 The one species that I have always wanted to capture images of has been Stoat especially in their winter coat. I got the chance a couple of years ago as we kept seeing fresh tracks in a pull-in area in the interior of the park. Every time we drove by this pull-in area we would stop and give it 10 minutes to see if the Stoat were active. Amazingly one time we pulled in and there she was darting from hole to hole and I managed to grab a couple of images of this beautiful animal. 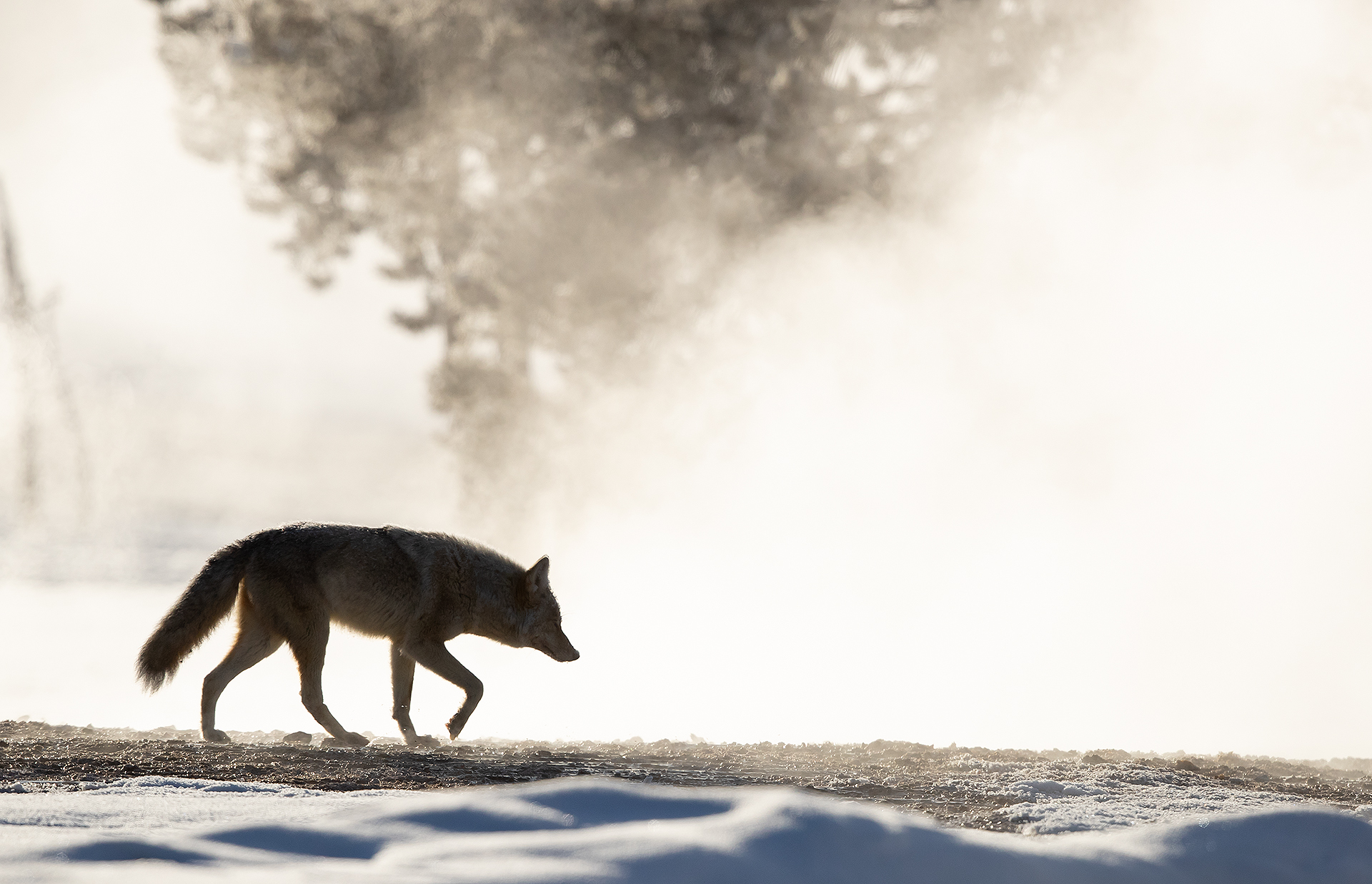 So, there you go just a small selection of some of my favourite images from my latest adventures to Yellowstone. I am missing not going this year and I cannot help but wonder what I could have seen but I can see light at the end of the tunnel and hopefully I get to go back to this wonderful location again next year. 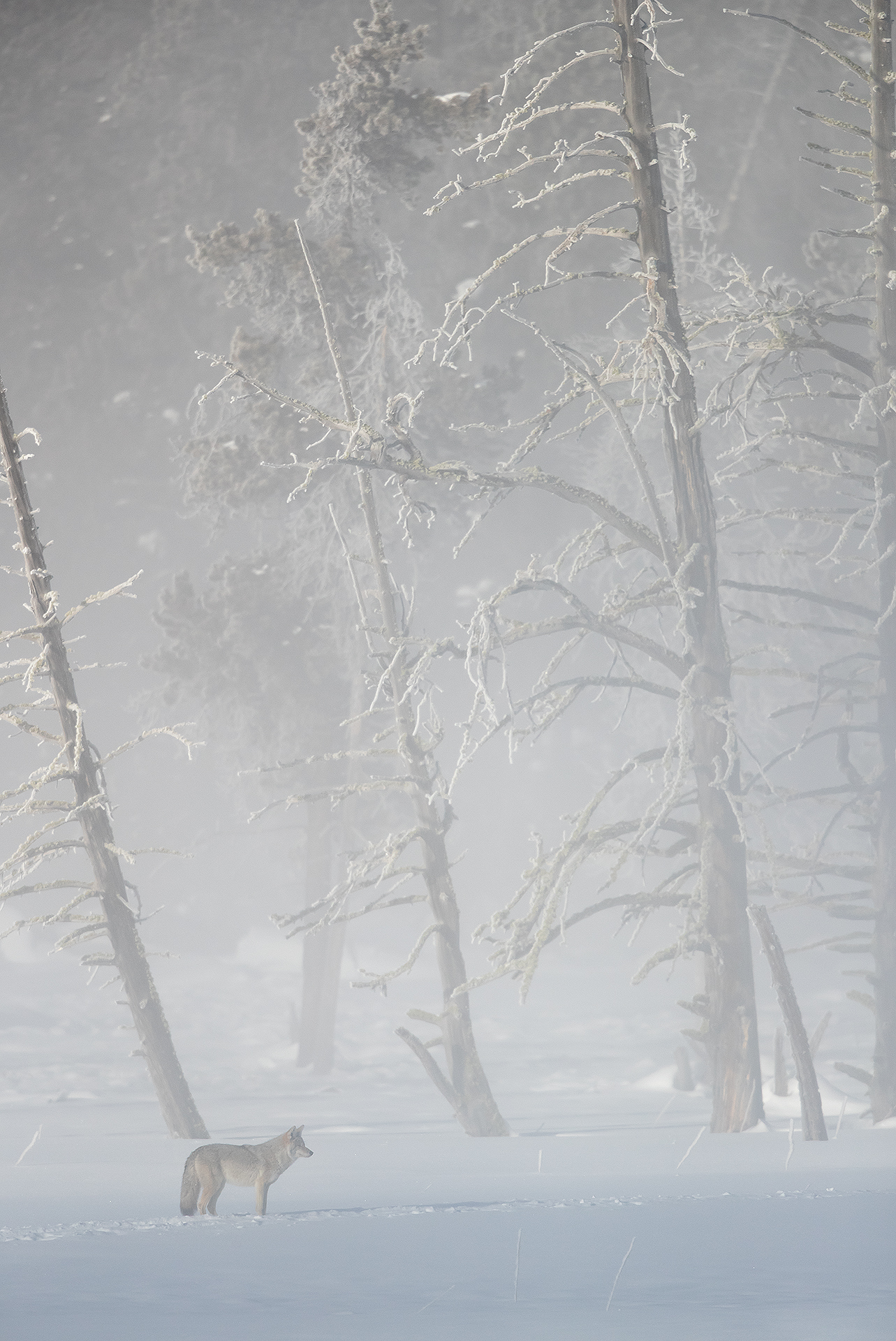 Copyright © 2021 Danny Green Photography. All Rights Reserved
Design by Netspur
Back To Top